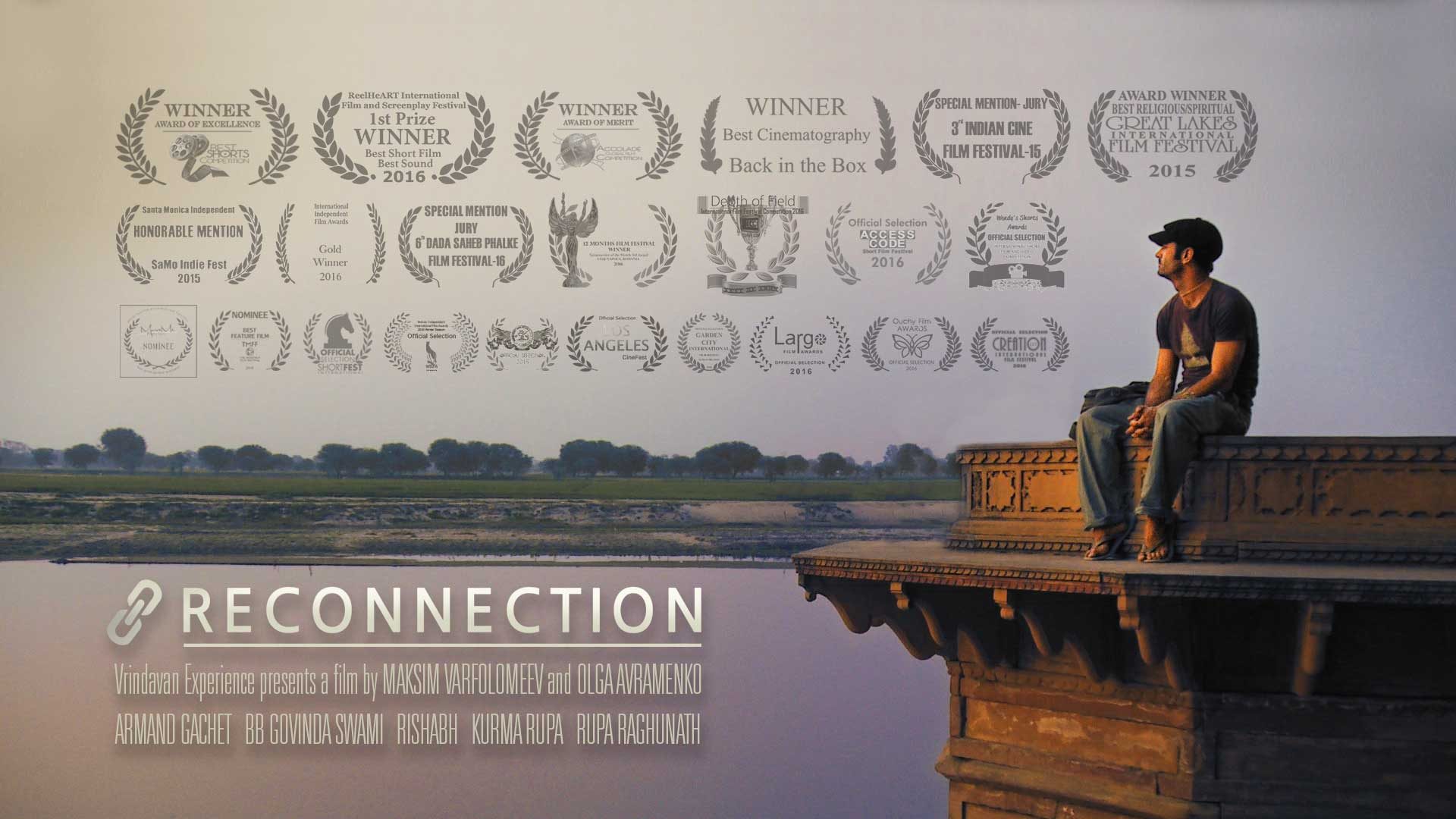 Article on ‘Reconnection’ in ISKCON News

‘Reconnection’ has been featured in a beautifully written ISKCON News article by Madhava Smullen. Below is a shortened excerpt from it.

Vrindavan might just be a small, dusty town in Uttar Pradesh, India.

But there’s something about it that changes people. It’s not just the hundreds of temples to Lord Krishna, who spent His childhood there, or residents’ uniquely familiar love for Him as if He were not God but their own kid.

It’s also the chaos, the dust, the unavoidably close quarters with crowds of teeming humanity that seem to draw us out of our politely anti-social, technology-addicted, sterile Western worlds.

Originally from Omsk, Siberia, Maksim Varfolomeev worked in commercials and as an editor for local TV channel Agava. His wife Olga Avramenko had been assistant editor for a regional network of newspapers.

From the beginning they always heard of Vrindavan as a powerful, mystical place, and after a visit in 2005 that gave them the bug, they returned in 2009 to make a documentary about its many holy sites.

“We started filming and soon realized that it was not going to be easy,” Maksim says. “It was like the place was not letting us in. We had to stay in Vrindavan, submerge and absorb ourselves in the local life. It was the only way to make it happen.”

The couple moved their whole lives as well as their production studio to Vrindavan. In Siberia, they were used to six months of snow a year. Now the sun was beating down at 110F. They were used to efficient modern facilities. Now the power would cut out twice a day and they had to bathe in their rooftop water tank. There were dust storms, open sewers, and animals on streets.

“Nobody complained, that’s just the way things work in Vrindavan,” says Maksim. “We realized that we had to surrender, to let go, to let ourselves soak in the Vrindavan mood.”

The resulting film, halfway between cinema verite and docu-drama, is beautifully shot and edited and captures in its warm earth tones the people, the buzzing energy, and the hectic town of Vrindavan – along with its conversely peaceful fields, golden sunrises and devotion.

Reconnection tells the story of Sean Fletcher (portrayed in a naturalistic way by non-actor Armand Gachet), a tech-savvy professional who drops by Vrindavan on his way to Nepal. Fletcher is on the wrong side of the digital divide – he conducts his relationships through Skype and Facebook while ignoring people right in front of him – and is harried by his job and problematic romantic life (his Facebook relationship status is “It’s complicated”).
But as the Vrindavan experience breaks down his sanitized bubble – one where the question “How are you?” doesn’t warrant a real answer – it starts to look like Fletcher might discover the love and warmth of personal relationships, and through that reconnect with his own heart and values.

To capture the journey shown on film, the filmmakers often simply placed Armand Gachet in an environment, made the camera invisible, and waited to see what would happen next. Much of the magic is watching local Brijabasis play themselves.

As Sean Fletcher went on his journey, the small crew, shooting from April to May 2011, had their own transformative experience.

“We had to leave our house at 4:00am to reach our destination before sunrise, and then we had 2 or 3 hours to shoot, because by 8:00am, the sun was burning,” Maksim says. “Often, when we got to a location, within a couple of minutes the locals would gather around, staring, standing in front of the camera, asking us to take their picture, and it became impossible to film.”

As Sean Fletcher says in a quote that bookends Reconnection, “People can change you. Places can change you. Some places you search out to find. Others have a way of finding you.”